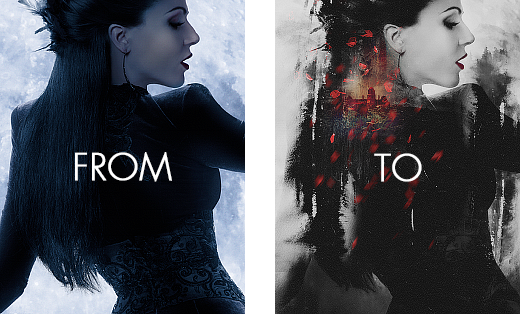 I don’t consider myself a pro or anywhere near like that in PS. I’ve been doing this for years because it’s my creative outlet and I’m super passionate about it. This tutorial is more like a guide and an insight into how I did things for this particular edit rather than a step by step how-to down to the very last detail. But I certainly hope this will still be useful for those interest.

I don’t always know what I am going to end up with. Sometimes I have a clear concept in my mind and work towards it but sometimes, like in this particular case, I just opened this promo photo of Lana and began playing. Without any idea of what I wanted. I just kept adding or removing textures, colors, extra images etc. I was just fiddling really. What you see here is my explaining how the actual end result that I have here was ultimately achieved.

That said, for this tutorial to be useful for you, you need to be familiar with: 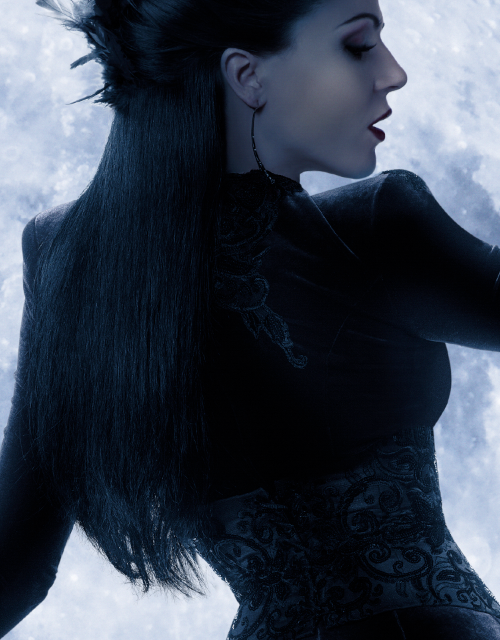 Cropping can be crucial. Sometimes focusing on little details or certain areas will help you emphasize or make your art look cool. I usually open an empty canvas and pull my image onto it as a new layer, so that I can move the uncropped image around. It gives me more freedom and see what positioning I like better. But cropping it immediately works, too, depending on what you prefer. 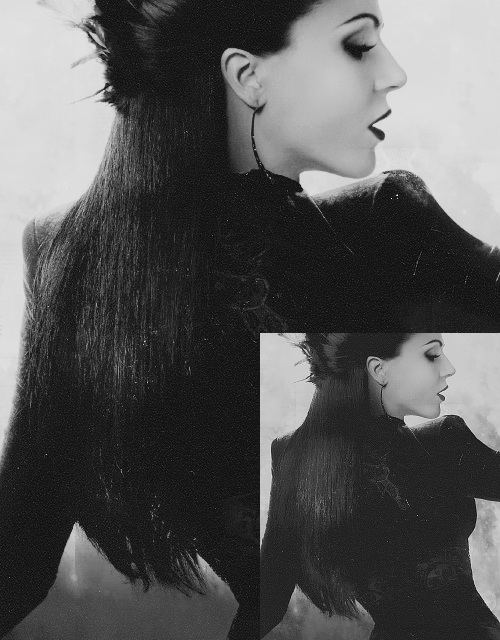 What I did here was apply my usual photo processing method through my PSD. It’s something I do as “base processing”, a PSD I have saved of a combination of Curves, Levels, Gradients, Gradient Maps and Selective color layers. This is something I have been using over the years, so that I don’t have to start from scratch each time. It just gives my images a good starting point. Obviously, it is all photo dependent. Sometimes I need to increasing the brightness, sometimes I have to lower it. It’s not a must. You do whatever you like doing to your images. 🙂

The point of this step is that I gave my photo the lighting and contrast that I wanted. (Tip: Curves are very good for me to lighten my images, Levels help with the contrast. And the layer order matters. Whatever you do with your images, do experiment. See what difference it makes if you add a gradient or color layer above or under curve layers, see what difference it makes if you happen to duplicate or even lower opacity of certain layers.)

After I gave my photo the contrast and lighting I wanted and after adding a texture layer (set to lighten) witch scratchy surface (I just like how it looks, you don’t have to do that), I turned it black and white. The above photo shows that turning an image black and white has different methods and they can look very different.

You can turn an image black and white through:

Gradient Map (Using Black and White color combination)
Adding a white or black color layer to the top of everything and setting it to “color”
Adding a “Black and White” Adjustment layer that lets you play with and adjust the different tones and colors, allowing you to brighten or darken certain areas.

Personal opinion: I never turn my base image or any other photo black and white. You can do that, of course, but it can give you different results and while that is absolutely fine if that’s what you prefer, for this art (as you can see in the end result we will be needing some colors), I have Gradient Map layer on the very top that keeps all my work black and white.

Important: Don’t flatten. As I am adding the rest of the images under all my Curves, Levels and Gradient layers, I do not flatten what I have so far. Adding your textures and other images underneath Curves and Levels layers will help you give the rest of the images the same kind of treatment your source images have. What I have here is: Base Image of Lana, Curves, Levels, Color Balance (it helps you change colors or even help with the contrast), a texture and a Gradient Map for Black and White conversion. 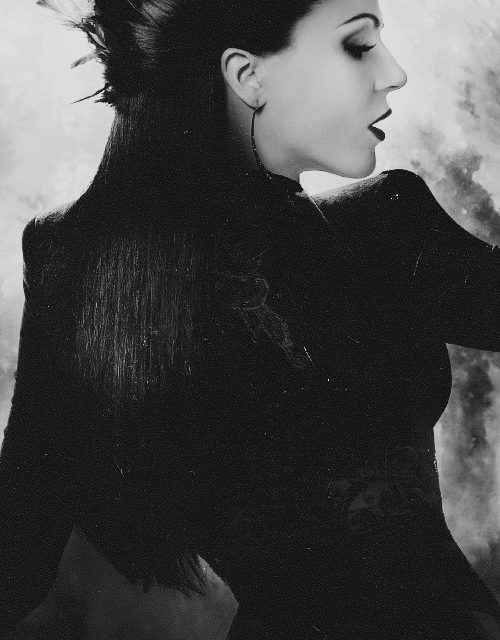 Very minor step here, but I have the contrast increased. Although I was just randomly fiddling with this photo at first, for the end result it looks better as we will be adding other photos on top of it, soon.

You can add contrast by adding a Brightness/Contrast adjustment layer, using Levels (by only increasing the dark parts), using Gradients, using the Burn tool (it lets you pick the Shadows, Highlights or Midtones depending on what you want to darken). Or you can even use brushes with darker colors.

I darkened the surrounding and background around Lana because of the texture that is coming on top of it later. 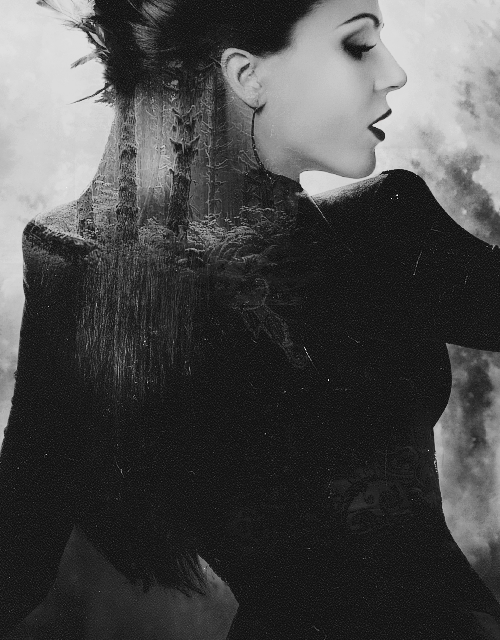 Blending is important and blending is something you can do through different settings, too. It always depends on the images you want to blend. If you put a darker image on top of a brighter one, Multiply or Hard Light might be better. If you do it the other way around, Lighten, Screen, Soft light or Overlay could be better. Like I said, experiment. Try different settings and see which works for you better.

For this particular image, I added a screencap of OUAT’s Enchanted Forest and set it to Lighten. As I said, it is directly above my source image of Lana and underneath all my Curves, Levels, Gradients, etc. What I did was mask out (simple Soft round brush) so it’s only visible on her hair.

5. Adding yet another photo. 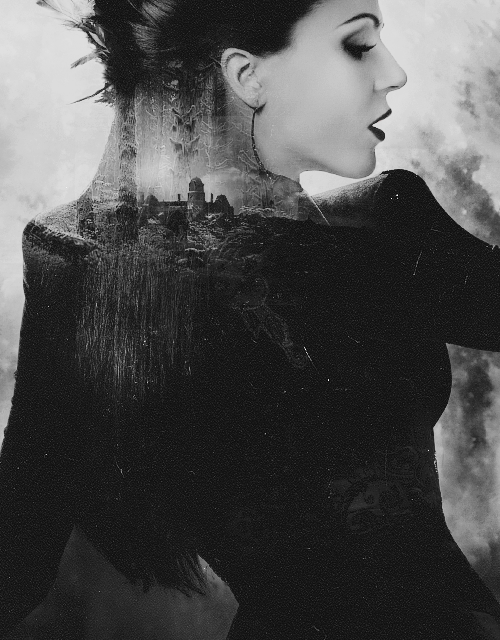 I did the exact same thing I did in the previous step, except this time it’s a photo of Storybrooke. Again, I masked out bits of the image that I did not want. This image is right on top of the Enchanted Forest one and set to Hard Light (opacity 55% for a nicer blending – don’t just try different blending modes, try different levels of opacity, too). 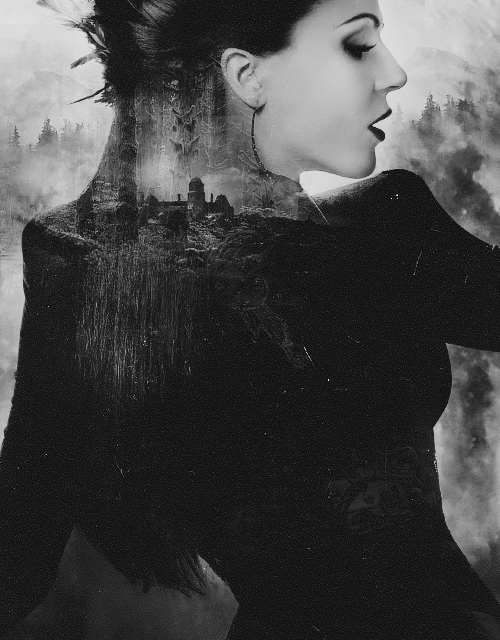 This time instead of adding yet another image on Lana and what I already have, I used a screenshot of the Enchanted Forest again and only put it above the moon background (on both sides of her head). I once again masked out parts of the image so it is only visible around her profile and set the new image(s) to Multiply (100%). 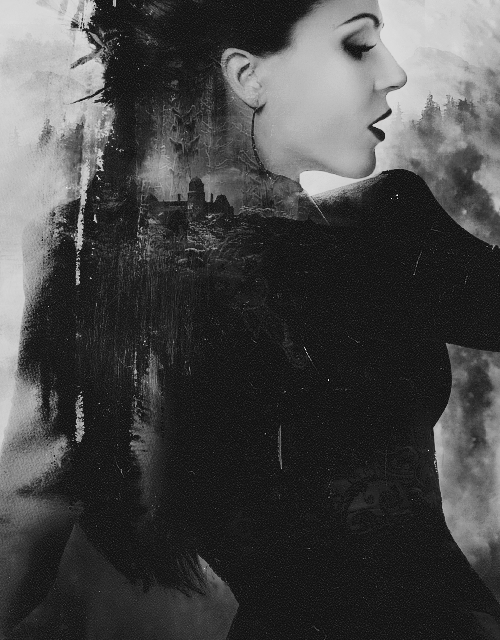 I used this texture by Jaehos. As you can see, I flipped the image and added it to her left side. I set the layer to Hard Light. I only kept a part of the texture, I masked out a good bit that was going to cover her face. 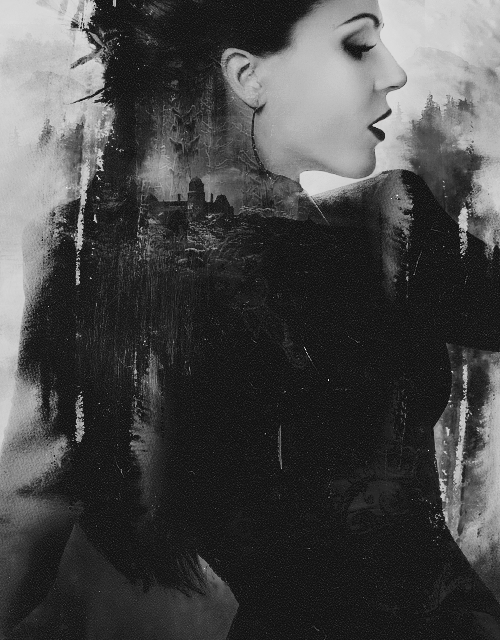 Once again, same texture, this time to the other side. I felt it rounded it up nicely. The grunge/brush look of it helps cover certain parts of my background while it also looks rather cool (I hope lol) in what it reveals. Once again, I masked out parts I did not want. I use masking because if I erase anything of my image, I can’t bring it back later if I decide I do need more of it. I think masking is the best because if you ever change your mind, you can always recover more of the image that you hid. 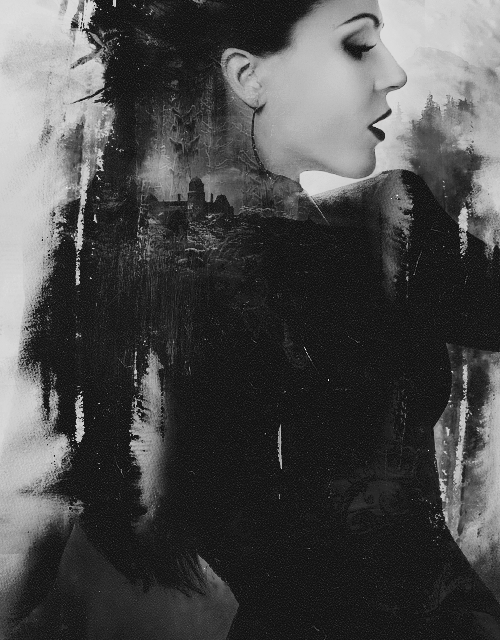 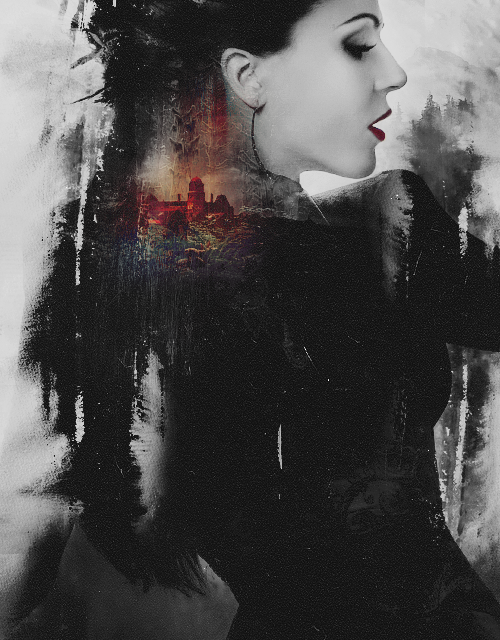 So this is why I said don’t flatten your image. I went to the very top where I had my Gradient Map layer keeping everything in black and white and I simply hit mask and… well, using a soft round brush, I masked out parts of it. That brought back colors to those areas only that I wanted. In this case, on her hair as well as some more colors to her lips.

I liked my previous image but I felt it was missing something. Something dynamic and something with more color. So I basically grabbed a texture of rose petals (terribly sorry but I can’t remember which one it was – I do recommend Getty Images’ Creative section or Sxc.Hu for cool textures and stock images that you can use for your art – the latter offers free HQ, or any of the people I listed at the bottom of this tutorial.)

So, I had my image of the rose petals, increased the contrast on it (Image > Adjustment > Levels – I did this to apply the settings straight to the image instead of adding an Adjustment Layer – adjustment LAYER treats it as a layer on top of EVRYTHING while doing it through Image settings (top menu) will immediately apply your changes to that one single photo ) and once done, I set the petals to lighten. That meant that the red rose petals with the black background were only showing the red petals. I then duplicated that image, used the motion blur on it and moved it a bit – and that gave the whole thing a rather dynamic feel.

So basically, that’s it. I hope this was useful to you guys in any ways. My best advice is to experiment. Try all sorts of things. Develop your routine, see what works for you and what settings and method you like best. Change up layer order, colors, add or remove… just play.

If you have any questions, feel free to hit me up. 🙂