Supporting a good cause

A few days ago I posted here that I was offering a special OUAT item as a giveaway among people who donate to Limina. The donation was how people were to become eligible to win this one poster by randomly choosing a winner.

But unfortunately raffles, even if meant for a good cause, aren’t allowed for fundraising, so Indigogo, doesn’t support them. Therefore I have put this poster up on ebay for auction to make it available for purchase. The proceeds will be donated to Limina. 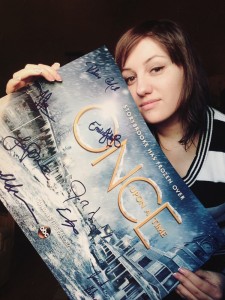 The poster is a Frozen themed OUAT poster that majority of the Once Upon A Time cast signed at San Diego Comic Con in 2014. ABC kindly sent me this poster as a thank you & as a prize for featuring my art for their promotion on their social media sites last year.

This poster is lovely, and it’s a gem – and I’m giving it away to support a good cause. The signatures included are: Adam Horowitz, Eddy Kitsis, Robert Carlyle, Lana Parrilla, Jennifer Morrison, Josh Dallas, Emilie DeRavin and Jared Gilmore.

So what is Limina?
As you Oncers may have heard from Lana Parrilla, there is a new project called “ Limina ” by Florian Halbedl and Joshua M. Ferguson, the people who have created Whispers of Life.  Limina is “an indie dramatic short film about a curious gender-fluid child who embarks on a path of kindness.”  The project needs funding, and they have set up an indigogo account where they are accepting donations. Lana and Emilie De Ravin both support the project.

How to get the poster & support them:
I have put the poster up on Ebay as an auction, and you can support the project by bidding on my item. I will subsequently donate the winning bid to Limina. If you can’t or don’t want to buy the poster but want to contribute anyway, please visit their webpage.